The Road from Nethernet Via Somewhere to the V&A

In August I was invited to take part in a Mainframe event, to discuss the idea of Digital Disruption, and to talk a little bit about Ara, my robot songbird that was exhibited as part of the Machine Made: Art, Robots and AI exhibition. 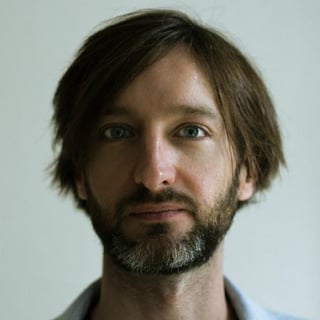 I started by talking about Digital Disruption on a very personal level. At the start of my career I took a learn-programming-by-mail course and completed it by sending it my work on graph paper. Learning to code by hand came in handy - within a few months the first dot-com boom in London meant there were suddenly many, many jobs that I could take.

I went from junior developer up to CTO roles in the space of a few years, and the very personal disruption to my life from digital was welcome.

The next change came as I began blogging about my time as a video game developer. That audience helped me to connect with new 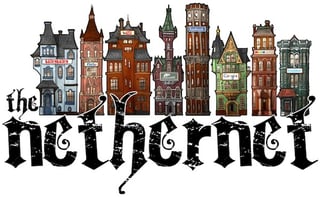 friends in the US, and we started a company together to build The Nethernet https://en.wikipedia.org/wiki/The_Nethernet. Our game presented a playful layer on-top of the entire internet, and a passive experience that tried to disrupt the entertainment industry. We raised plenty of money but weren't able to stay the course. I quit the company and learned some important lessons.

My second company, Somewhere https://thenextweb.com/futureofwork/2015/08/05/somewhere-make-the-most-of-the-new-world-of-work/ tried to disrupt the out-of-date digital recruitment industry. We built a community of people trying to show the world what they did all day. As much as digital had disrupted our working lives, there was no sign that the way we hired people had changed. For many people the Future of Work was something on the horizon, but for the people on Somewhere it was happening right now. They shared their work and disrupted the ideas of a company as a brand, becoming a company of individuals and teams.

The final subject I addressed on the subject of Digital Disruption was the numerous side projects I've been involved with. Some, like Somewhere, began life as side projects and went from my backyard to a growing business, but many others are short-lived experiments to try to make sense of where I am. Projects like trainee (a twitter bot which sent me direct messages when my regular trains were delayed, which later grew to become a little sarcastic), worryee (a twitter bot which randomly, and privately, asked me what I was worried about, in an attempt to use technology for mindfulness). Other bots included Grokitbot (a Bayes-driven robot who ran on AIM/MSN/IRC and guessed meaning through spelling mistakes and new questions), and experiments like Bliss (an anonymous version of 4sq without the people and the locations) or Amy Href (a serial-newsletter-subscribing robot that learned to maintain a curated link-log of the best stories in each newsletter).

Ara, in the same fashion, was a side project created in spite of the utilitarian Internet of Things 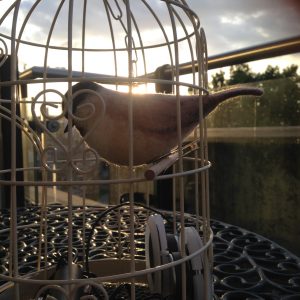 industry. Annoyed at so many step trackers and heartbeat monitors, I challenged myself to build a robot that sang, if only for it's useless nature and making it prominent to show up the lack of creativity it was standing against. I built Ara into a physical robot companion, using generative audio code to give her the tools to sing her own songs during the day, becoming slightly agitated around sunrise and sunset just as a real bird would. Ara lives in a cage and became a big part of my life, just as a living pet would. When the time came for her to join the Derby QUAD exhibition, I was surprised by how much she left a whole in my homelife.

After I'd spoken about Digital Disruption in my personal and professional life, Leila Johnston took over. If you saw the event on periscope then you'll also have seen the short Q&A session at the end of her talk.

I'd like to thank everyone at Derby QUAD for their invitation and friendliness, it was a really great evening.

Want to hear more from Duncan?